As you guys would know, I love a good mock-up newspaper! Whenever I encounter one, I try to include a screenshot in my review; but some films offer so many treats of this nature that one shot won’t do it. So I’ve decided to create a space where I can take a closer look at the fine detail of these beloved movie props.

Of course film-watchers weren’t meant to subject these mock-ups to forensic analysis, and when films were only viewable in the cinema, generally you couldn’t. These days, however, a sharp eye and a good pause button reveals just how often, and over how many years, the same mock-ups were re-used.

I’m going to put this up top to help me stop confusing myself with this: it’s very easy to think I’ve seen something twice just because I’ve been scrolling up and down here!

(Question: is that the same youth in the last two??)

Ones I’m sure I’ve seen more than once:

I’m very proud of this one! I mean, everyone knows about Panic in New York: Menagerie breaks loose, but this is my baby! At least, as far as I’m aware no-one but me has repeat-spotted New ‘Living Buddha’ Reported Discovered.

This mock-up newspaper subheading first caught my eye during Gigantis, The Fire Monster, the 1959 Americanisation of Godzilla’s Counterattack. I next spotted it in The Mummy’s Tomb, which was released 17 years earlier! And you may imagine my giddy surprise when I spotted it again while watching the non-genre drama, Girls On Probation, made in 1938! 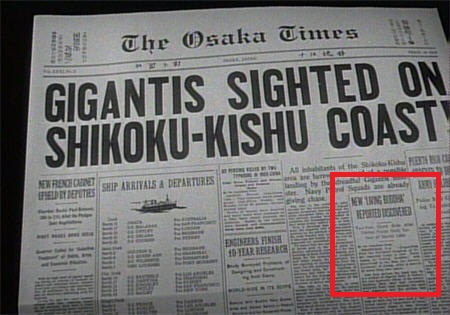 When I posted the mock-up newspapers from Gigantis, The Fire Monster (see Part 2), commenter Uncle Mike felt that he had seen the headline, $3,000,000 for Aid Pledged for S. A. Earthquake Victims, somewhere else. I thought I had too—and was delighted when I subsequently spotted it in one of the papers from The Flying Saucer.

But that isn’t all! The Gigantis paper has a smaller headline to the right, Limited Farm Bill Favored, which also rang a bell for me; and that too is in the mock-up from The Flying Saucer!

I’m also very sure that these films do not exhaust the usage of these two headlines—stay tuned!

In fact, Gigantis turns out to be a goldmine of repeated headlines, as well as further proof of how long the same mock-ups were used and re-used by the studios.

Obviously (and not surprisingly), The Mummy’s Tomb and The Mummy’s Ghost used the same template for their mock-ups, because their newspapers have more in common than just headlines about rampaging mummies—giving us four separate instances of reused “stories”:
– Victory Sighted In Fight Against Yellow Fever
– Ocean at Last Yields Its Gold and Its Silver
– No Precedent For Handling Certificates
– Passengers Make Hasty Exit From Blazing Street Car 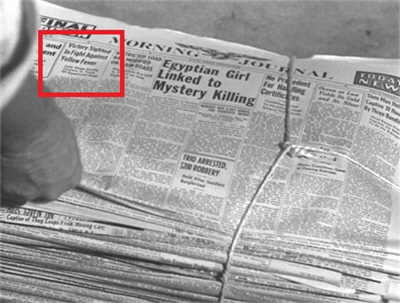 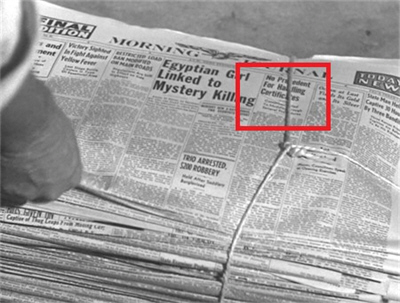 The Mummy’s Ghost is another that just keeps on giving! In addition to its numerous double-ups with The Mummy’s Tomb, it offered another of those I’ve seen that somewhere else touches—which turned out to be Gigantis, The Fire Monster:

There’s only one newspaper in Destination Moon, but two headlines on it caught my eye—though I’ve only been able to pin down one of them, City Transfers Bond Millions To Sinking Fund: I’d spotted it before in The Walking Dead, in fact from the identical positioning the two films may have used the same mock-up.

ETA:  The serial Flash Gordon, also from 1936, uses this same headline in its mock-up paper: 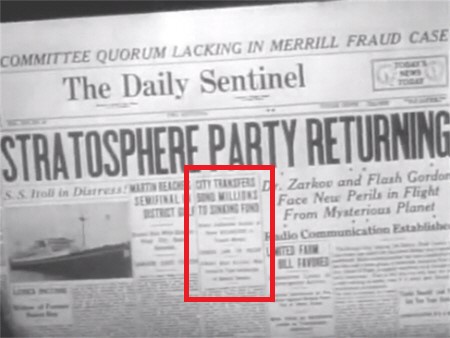 What’s frustrating is that I’m sure I’ve seen State Bureaus Must Pay Rent In New Offices somewhere before, too; not only seen it, but remarked on it; but do you think I can find it again? Stay turned…

Several of the headlines in the first newspaper seen in Ghost Patrol, a science-fiction / western B-film, caught my eye, though I was only able to identify one of them—chiefly because I already joked about it in a review!

But I’m sure I’ve seen that headline about the Chinese floods elsewhere too, though I can’t find an example at the moment. (ETA: Gotcha! – see below.) And there’s a third headline to the right about ‘large gains from investments’, I think, which is only seen clearly in a different shot of the paper, that also struck me as familiar. The hunt continues! 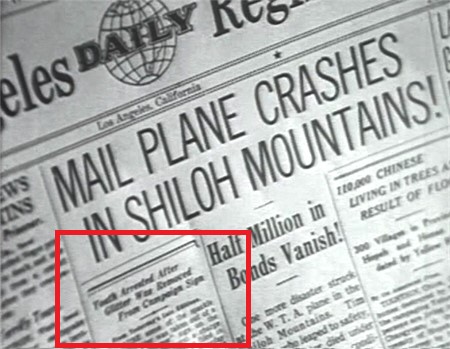 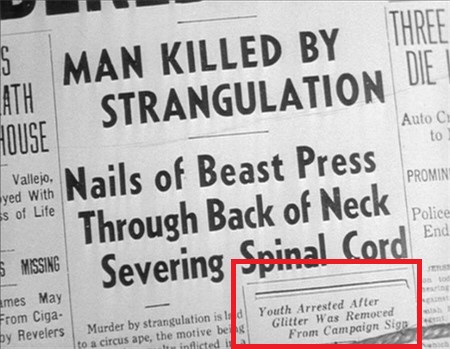 Pardon me quoting myself, but up above in Repeat Offender #10 I complained re: Destination Moon that:

“I’m sure I’ve seen State Bureaus Must Pay Rent In New Offices somewhere before, too; not only seen it, but remarked on it; but do you think I can find it again? Stay turned…”

I have now just found that headline again, and remembered where I saw it the first time: in The Creeper, from 1948, which uses enough mock-up papers (and not well) to end up over in Up Close.

My new discovery, however, is in Love Takes Flight, an aviation romance-drama from 1937. This film uses a number of mock-ups, but most of them are superimposed and therefore not clear enough for study. What we can see is generally done rather well; albeit that one story about the film’s heroine suddenly gives way to, Although he succeeded in gaining…

Meanwhile, another story sits side-by-side with something else I’m sure I should be looking out for: Fire In Everglades. (ETA: Found it! – see below.) 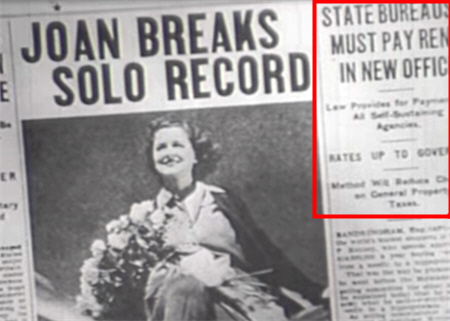 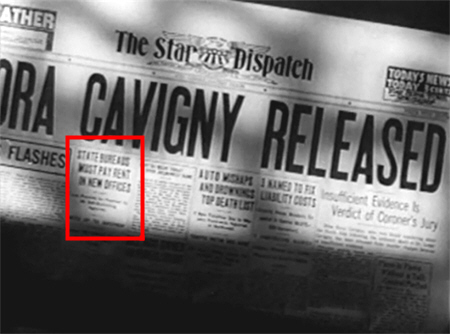 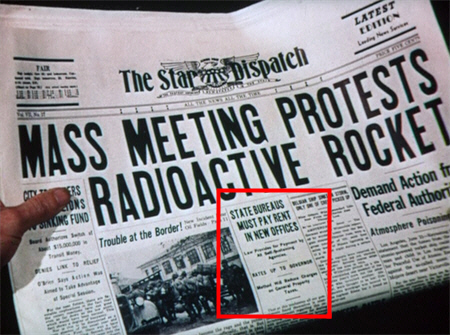 Most of the sub-headlines in The Gorilla are too blurry to be certain of, but I did catch one that seemed familiar: Steel Demand Fairly Steady. 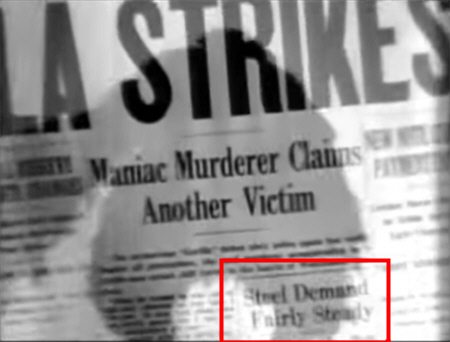 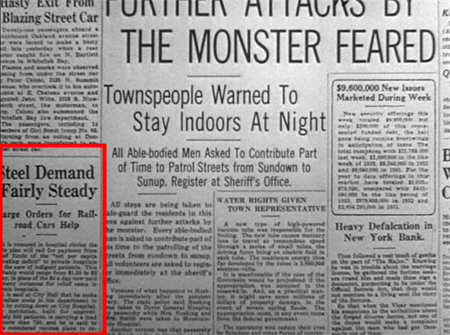 I love it when we get a self-repeater—that is, a film reusing the same material in different mock-ups.

I can’t say I’ve see one like Reefer Madness before, though: it uses the same headline, Sheriff Holds Youth: Admits Knowing Victim, both between mock-ups and in the same mock-up! 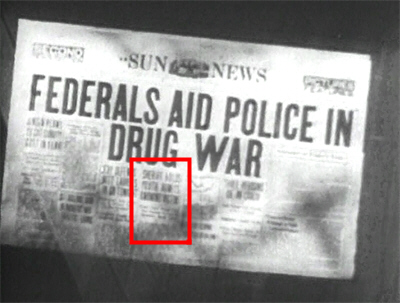 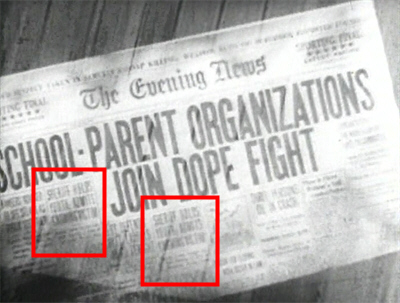 Annoyingly, though, I remember making a joke about that headline in another context but can’t remember where—watch this space…

…and bingo! – I did note the presence of this headline in another film, but recorded it over in Up Close: 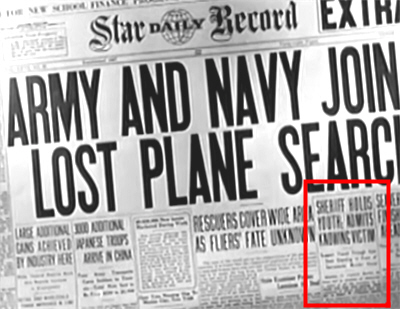 The 1938 film Mystery House allowed me to shift not one but two headlines from “I’m sure I’ve seen that before” up to “definite repeaters” (see also below), and also gave me a new Repeat Offender!

The second gotcha from Mystery House, used in a different mock-up, was 110,000 Chinese Living In Trees As A Result Of Flood (and there will be others, I’m quite sure):

(You may have to take my word for this one!)

The newcomer to our ranks is A Record Set In City’s Sale Of Bond Issue, which also showed up four years later in The Mummy’s Tomb (another gift that just doesn’t stop giving!):

And in fact, I’ve put the wide shots of both the mock-ups from Mystery House over in Up Close, because they strike me as something I’m likely to be coming back to…

Another “I knew it!”

I was sure I had seen Building Code Under Fire in a number of places but could not immediately spot them. However—

We take a more detailed look at some of these mock-ups in Part 2: Up Close.