In this section, we take a closer look at a few of the many mock-ups which have (dis)graced our screens over the years!

College Coach (1933):
…features numerous headlines, and only headlines, to convey the success or otherwise of the film’s central college football team: 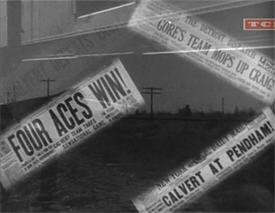 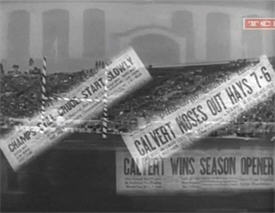 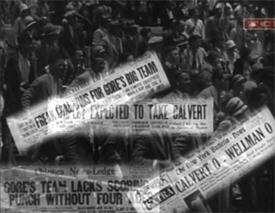 There are only two “full” newspapers used, and it is fairly evident that real newspapers have been used, and used rather well, so little inadvertent entertainment is offered by them—other than the fact that no-one can decide on the spelling of the surname of Calvert’s star quarterback, offering both “Sargent” and “Sergeant”. We can hardly blame the newspapers for this, since the film itself never settles on a spelling either: it’s “Sargeant” in the opening credits, but “Sargent” on the quarterback’s class list. 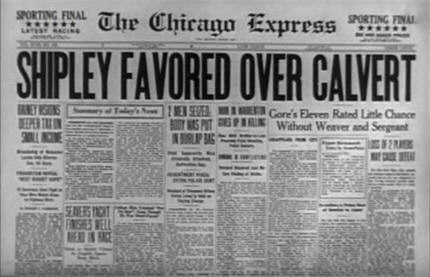 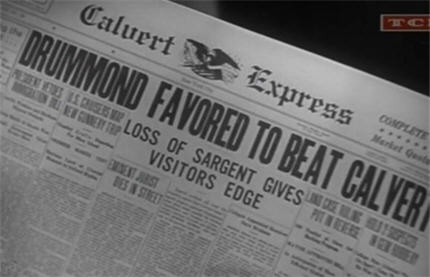 Supernatural (1933):
…uses its few newspapers efficiently on the whole, mostly to summarise the career of serial killer, Ruth Rogen. There’s only one overt blunder, when fake spiritualist, Paul Bavian, buys a paper: we see him reading a story about Ruth swearing vengeance against the man who betrayed her (guess who?); but that isn’t the headline on the paper in the longer shot: 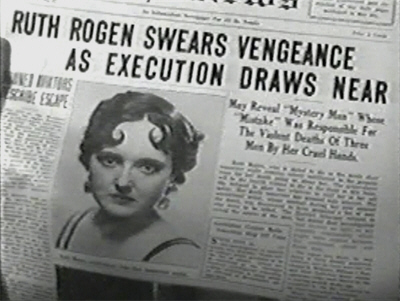 (Can anyone read the third word in the first headline? LOVE NEST—what??)

Death In The Air (1936):
…uses headlines mostly to emphasise the enormity of its villain’s crimes, which consist of shooting commercial planes out of the air. The production evidently used real papers rather than studio mock-ups, and apart from one amusingly ambiguous headline – Sheriff Holds Youth – the news is pretty grim; particularly in China, afflicted simultaneously by earthquakes and the arrival of still more Japanese troops. In-film, we have only the unnamed Police Chief’s blanket dismissal of the dying testimony of the one person not killed outright by the psychotic pilot to smile at: 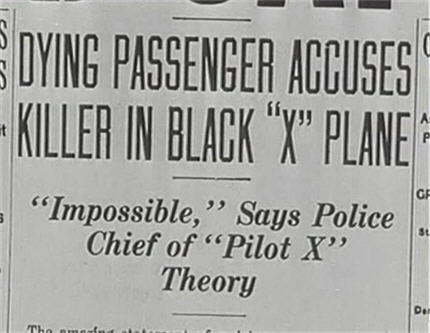 The Walking Dead (1936):
…uses only a few mock-ups and (disappointingly from my point of view) does an excellent job integrating the film’s material into real papers.

There is, however, a typical Warners touch in the reporting of the astonishing resurrection of the wrongly executed John Ellman, with “mad science” sitting cheek-by-jowl with the prosaic announcement that Ellman’s attorney will be suing the State for wrongful death:

Otherwise, my attention was caught by the story bumped from the front page by news of Ellman’s pending execution—Three Former Bank Clerks Held Following Sensational Confession By Delivery Boy: 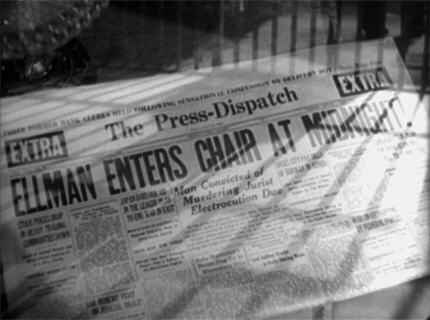 The Devil Bat (1940):
…is a riot of mock-up papers, all reporting Death By Embiggened Bat. No less than ten different front pages appear, each with a zoom-in to match; and although these represent the journalistic offerings  of the Chicago Daily Register, the Peoria Gazette, the Springfield Daily and the Heathville Daily, it is amusingly clear that the same templates were used over and over, since the all-too-clear sub-headlines appear again and again in different editions, and even in different papers. Thus, both the Peoria Gazette and the Heathville Daily favour short, pithy headers like “Congratulations” and “Controversial”; while we can only ponder the content of the Chicago Daily Register‘s ongoing front-page columns—not so much “Americanism”, perhaps, but definitely “Pericles The Great Athenian Speaks”. The same paper manages to get the name of its star reporter wrong, although the Peoria Gazette sets the record straight. The big winner, however, is the mysterious “Mac”, who appears in the right-hand column of all ten front pages. 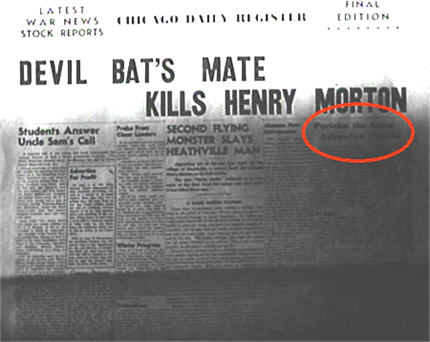 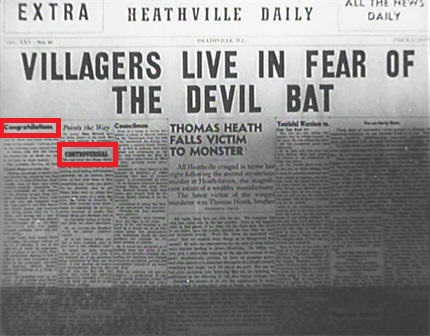 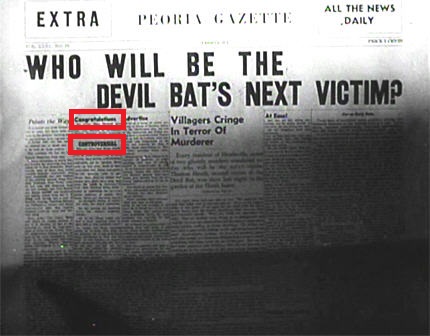 The Mummy’s Tomb (1942):
…is most remarkable for the fact that, despite being made and, presumably set, in 1942; having a character being called up as a subplot; and featuring a reporter joking about being sent to the Russian front, not one of its fairly numerous newspapers so much as mentions the war!

Otherwise, we note the contradiction between the paper headlines and the in-film dialogue, which suggests that there is already a “fiend” at work in Mapleton before Kharis arrives; busy town!

As mentioned in the review, the sub-headline ‘Murder Attributed to Supernatural Being‘ always cracks me up. However, allow me also to draw your attention to the sub-sub-headline to its right—‘Taken for Chipmunk, News Worker Shot’—joke, or not?

The Mummy’s Ghost (1944):
…offers both a riot of Repeat Offenders in its mock-ups, and an amusing indication of how such mock-ups are put together.

Though the tiny size of the font makes it easy neither to see nor to illustrate, a close examination of one of the film’s faux-front pages reveals that with several of the stories, a new headline has been pressed into existing text. Thus, for example, the headline Heavy Defalcation in New York Bank is followed by what sounds like an excerpt from a comic short story: Then followed a real touch of genius on the part of “The Major”. Knowing he was in trouble about the marriage license, he gathered the fortune hunters round him and made them sign a document, purporting to be under the Official Secrets Act…

This approach was also taken for the paper’s lead story, with the call for “able-bodied men” to volunteer for mummy-watch suddenly giving way to an account of the aftermath of a car crash: Versions of what happened to Hosking immediately after the accident vary. The state police said that Hosking was taken to Denver General Hospital by passerby while Mrs Hoking and Mrs Smith were taken to Mountainside Hospital…

Captive Wild Woman (1943):
…gifts the audience with a tale of a mad scientist transforming a gorilla into an attractive young woman, who displays an unfortunate tendency to revert when her emotions get too much for her. There’s only one paper in the film, and quite a carefully prepared one (which declines to reveal what city we’re located in); although its writers seem more than a little confused over the meaning of words like “murder” and “strangulation”. Meanwhile, it is hard not to be distracted from the matter at hand, i.e. a killer gorilla on the loose, by local law’s hard-line stance on glitter removal: 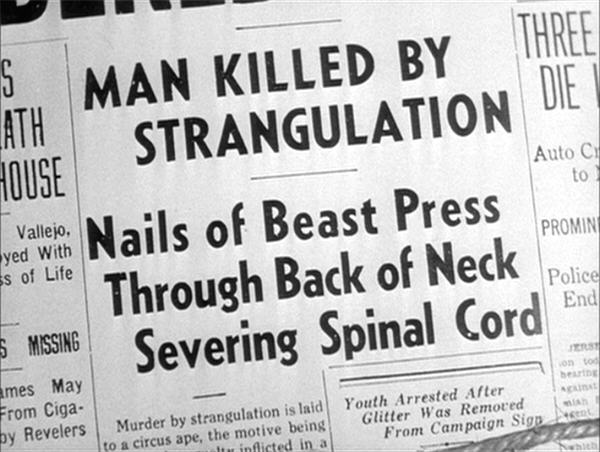 The Iron Major (1943):
This biopic of college football coach and WWI hero Frank Cavanagh is a low-low-low-budget production that gets enormous mileage out of stock footage and shots of newspapers—more newspapers than feature in The Devil Bat, our previous champion! The difference here is that these are clearly real papers, dug out of the archives to indicate the passage of time, to highlight important historical events (including the sinking of the Lusitania), and to convey the fortunes of the various Cavanaugh-coached teams.

As far as I can tell, there’s only a single instance of tampering, when a picture of Pat O’Brien as Frank Cavanaugh appears on one front-page via the 1943 equivalent of Photoshop: 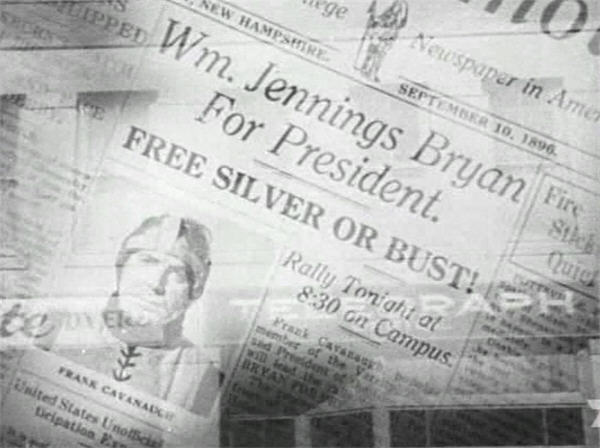 Historically, despite the war news, I found this front page to be of the most interest:

Devil Bat’s Daughter (1946):
…is an in-name-only sequel to The Devil Bat that spends most of its running-time contradicting the action of the earlier film. The main thing these two productions have in common is their tendency to convey information to the audience via newspaper headlines; although, alas, more care went into the preparation of the mock-ups in Devil Bat’s Daughter, using, it appears, real newspapers instead of prop templates, which by definition makes them far less funny. In fact, we’re reduced to finding humour in the New York Record’s inability to place an apostrophe correctly:

The Creeper (1948):
…is all but a remake of Devil Bat’s Daughter, and like it has its heroine suspected of committing murder while suffering a blackout. Nora is subsequently discharged due to lack of evidence—with an unwise zoom allowing us to see that the newspaper story about Nora has been imposed over a real one about a conference: Ninety-four projects, reports and proposals covering the conference’s twenty-three point agenda…

The Flying Saucer (1950):
…was the first science film of the decade, but rather than giving us space and/or aliens, serves up a silly Cold War spy-story about a “saucer” manufactured on earth for the purpose of dropping nukes. However, when the saucer in questioned is spotted, it sets off the predictable panic. The papers eat it up, of course; though we might be inclined to wonder why the Washington Globe chose to focus upon their appearance over Idaho: 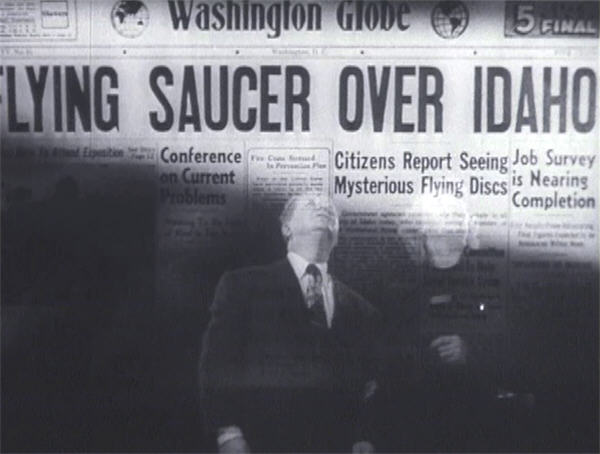 However, the best part of the saucer panic is undoubtedly that we learn of it via a spinning newspaper!—

Warning From Space (1956):
…in its original form does use the occasional newspaper as a prop, though in the current Showa print there is no translation of the text; but conversely, there’s an interesting use of papers in English and French:

The American version of the film shows no such restraint, but piles on the mock-ups in order to convey information through their headlines (though really, they don’t tell us anything not conveyed by the dialogue). We note the amusing distinction drawn between “scientists” and “experts”: 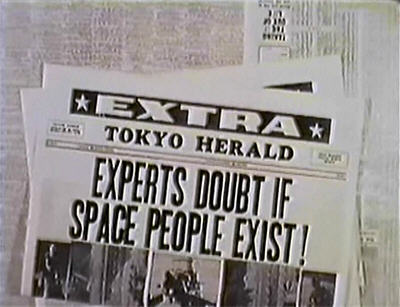 However, of all the papers used here, this is the one that really caught my eye—PLEASE tell me the original ending of that sub-headline was Menagerie breaks loose!?

Gigantis, The Fire Monster (1959):
…is the Americanised version of Godzilla’s Counterattack, the second Godzilla film. Although it keeps the same story as the Japanese version, there is some significant dumbing down here, as well as the inclusion of elements presumably meant to make it more appealing to American audiences.

For instance—apparently Japan being threatened by giant monsters isn’t interesting enough; the film therefore suggests that America is also threatened—gasp! And of course, the Japanese aren’t capable of dealing with the situation themselves, but have to rely upon American help. (Which never eventuates within the film, but it’s the thought that counts, right?)

Naturally, these details are conveyed via newspaper: 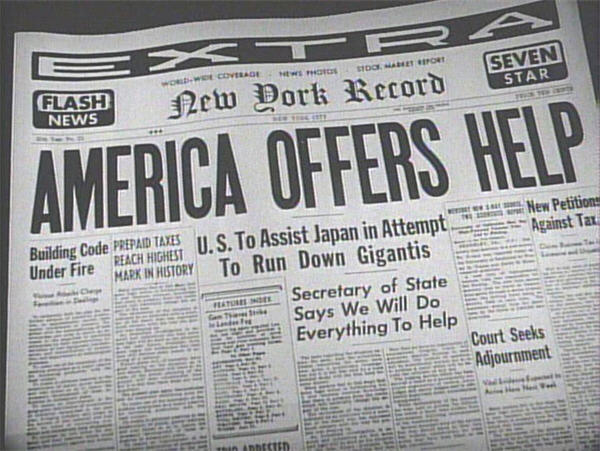 Mind you—all this monster mayhem fades into insignificance besides the fact that Gigantis actually features a spinning newspaper!—

Project X (1968):
…is a low-budget science fiction actioner from William Castle, which is set in the far-flung future of 2118, but which conveniently enough must recreate 1968 as part of an elaborate scheme to access an individual’s buried memories. The scientists in charge of the project get a crash course in the 1960s, and are properly appalled.

This is one of the more interesting mock-up sequences I’ve encountered, inventing a series of fake newspapers (like the Oakland Bugler) but carefully integrating new, shocking stories into real material. However, the art director does slip up at one point: all the papers are dated January 2nd 1968, but when we get a close-up of one of them, the real material is dated March 12th:

Hurricane (1979):
The best (only?) touch of intentional humour in this overblown melodrama comes in the form of a throwaway joke perpetrated by, presumably, Italian production designer Danilo Donati: the newspaper which Jason Robards uses as an umbrella carries the headline, Italy To Tax Bachelors. The “bachelor tax” was real enough, imposed by Benito Mussolini in an effort to get the country’s birth-rate up, and it lasted as long as he did. This bit of business places the film’s action in 1927: