I am by no means an expert in slasher movies, but I know what I like; and what I like best is an engaging Final Girl. For me these films aren’t about their kill-scenes so much as the final showdown between killer and nemesis.

What makes a good Final Girl? I think the most important qualities are intelligence and imagination, particularly when it comes to tactics and weapons. Her situation will also demand courage, and toughness, and judgement. I enjoy those scenarios in which a Final Girl is protecting someone else, and therefore lacks the option of just saving her own skin. I also prefer (if I can put it this way) an ordinary Final Girl: she might be smart, she might have specialised knowledge; but she shouldn’t have training in hand-to-hand combat, or be a martial arts expert—or even (ahem) telekinetic.

And one day, while I was pondering these matters – you know, as you do – it occurred to me to attempt to rank the Final Girls.

In a sense, though, I’m doing this backwards—inasmuch as I’ve already decided who the best Final Girl is:

I came away from my first viewing of Friday The 13th Part 2 mightily impressed with its Final Girl, Ginny Field, played by Amy Steel; and nothing I’ve seen since has changed my mind about that. On the contrary, over time I’ve come to consider Ginny the pick of the crop; just as I think her showdown with the bizarre first incarnation of Jason Voorhees is one of the very best of the Final Girl sequences.

Consequently, my ranking of the rest will be a matter of judging how they stack up against her; while their qualities (or lack thereof) will be measured on The Ginny Scale:

I should stress that I am using the term “Final Girl” generically here: I’m aware, of course, that there have been Final Boys, and Final Couples. I’m also aware that not every slasher movie has a Final Girl (or Boy, or Couple); whereas some horror films that are not slasher movies do. But the context doesn’t matter: if my general criteria are met, you’ll find her / him / them here.

Remember too that I am not rating the films here, only the Final Girl sequences: as we see below with respect to The Amityville Curse, it’s possible to have a good sequence in a bad film.

And because this is an exercise in ranking, the points awarded are not set in stone; comparisons can make things look better or worse, so there may be some tweaking of rankings as I go along.

These short film discussions will contain explicit spoilers, including the identity of the killer and how that killer is disposed of (if s/he is).

As the ur-Final Girl, Laurie Strode is almost literally above criticism. Of course in the cold light of analysis she makes unforgivable mistakes, including putting her weapon down repeatedly and turning her back on her “dead” adversary; but then it’s a case of live (just barely) and learn. It’s true that does not herself dispose of Michael; but then, it’s also true that nothing really can… Laurie’s battle with Michael has the added tension of the presence within the house of the children, and it is her need to protect them and her constant thought of their safety rather than her own that elevates the conflict. Laurie also wins points for the ingenuity of her weapons, particularly the coat-hanger: Michael didn’t – as it were – see that coming…

I am awarding her: 9 Ginnys

Alice’s main strength as a Final Girl is her ability to turn almost anything into a weapon: she arms herself at the first opportunity, and works her way through an impressive array of random objects, doing some real damage with a frying-pan. She does make some serious mistakes, but so early in the slasher-movie cycle, we can cut her a little slack for that. She must also overcome a deep reluctance to kill but, when finally forced to take action, she takes it very definitively.

I am awarding her: 8 Ginnys

Weapons: Gun
Other talents:  Shrugging off sedation / adverse reaction to sedation
Transgressions:  None
Negatives: None (that are her fault)
Virgin? Yes
Protecting others? No
Disposal of killer:  Blown up by Dr Loomis after being shot twice
Length of FG sequence: 22 min / 13 min (depending on where you count from)
Bonus Laurie Strode Points for being Laurie Strode? Yes

Halloween II commits many sins, but its reduction of Laurie Strode to the status of passive non-participant for much of its length is the biggest; and even when she is up and around, it is only to run and hide, not to fight. The difficulty of deciding when the Final Girl sequence starts also highlights the dilution of her role: there are repeated cutaways to other characters, instead of a focus upon Laurie. I’m not crazy about her use of a gun, either, but that’s a matter of personal taste. On the plus side, Laurie’s will to survive is still admirable, and she shows courage and ingenuity in evading Michael in spite of her injuries and sedation; but this is nevertheless a far cry from the Laurie of Halloween.

I am awarding her: 4 Ginnys 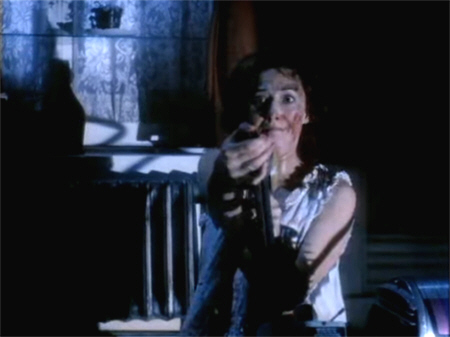 One of horror cinema’s most unlikely Final Girls is Debbie, from The Amityville Curse: unlikely both because the wishy-washy nature of the character up to that point, and because the film she’s in is pretending (poorly) to be part of the Amityville franchise. It drops the pretence with about ten minutes to go, however, and offers up a lively, bloody Final Girl sequence that very nearly redeems all that has gone before. When forced to fight, Debbie drops her Meek Miss Mousie persona and displays an unusual ruthlessless—all the more so because her adversary is / was a long-time friend. She does put the nail-gun down a trifle prematurely…but compensates with a vicious wielding of a metal spike that simultaneously saves her friend’s life and disposes of the killer.

16 Responses to Ranking the Final Girls