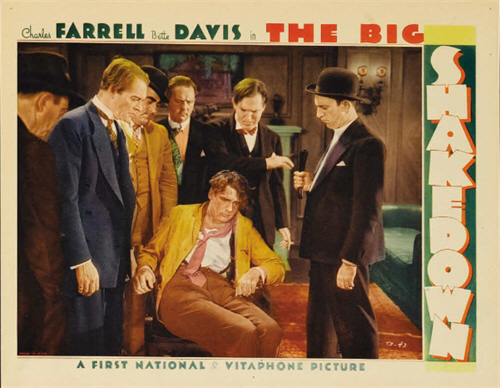 In the mid-1930s, Warners made several films dealing with out-of-work gangsters figuring out their next move in the wake of the repeal of Prohibition – or as ‘Dutch’ Barnes (Ricardo Cortez) sees it, “The Government muscling in on our racket” – but while the majority of them make this situation the basis for a comedy (for example, in A Slight Case Of Murder starring Edward G. Robinson), 1934’s The Big Shakedown plays it more or less straight.

The film opens with the goons in Barnes’ employ trying and failing to get their brand of beer into the old neighbourhood outlets: the customers are no longer intimidated, the cops are no longer on the take—and the beer is awful. Barnes finds himself with two useless breweries on his hands and a splitting headache. He heads for a neighbourhood drugstore owned by young pharmacist, Jimmy Morrell (Charles Farrell), who runs it with the help of his fiancée, Norma Nelson (Bette Davis).

Morrell explains that he has no supply of the headache powder favoured by Barnes, but that he can quickly mix him up something just as good; in fact, identical. This catches Barnes’ attention and, flattered by his interest, Morrell expands upon his point—claiming that he has the professional skills to reproduce a great many products at a cut price, and so giving Barnes an idea for a whole new racket…

In short, Barnes moves into the counterfeiting business—packaging Jimmy’s knock-offs as the real thing, in order to take advantages of the genuine companies’ advertising, and then resorting to the same old strongarm tactics to get them into the drug stores.

Science per se plays a relatively small role in The Big Shakedown, though it does offer a fascinating if fleeting glimpse into the state of the pharmaceutical industry at the time—having some rather biting things to say about mark-ups and profit-margins; while the fact that Jimmy can and does whip up products just as good as those marketed by the major companies speaks for itself. The difference, the film implies, is not the quality of the goods but merely the size of the advertising budget.

Meanwhile, though one of the film’s main characters is a scientist, he’s not exactly a credit to his profession. In fact, this film functions as an examination of just how stupid one man can be while still being sufficiently bright to qualify as a pharmacist. There are a few brief but enjoyable scenes of Jimmy Morrell busy in the compounding laboratory at the back of his drugstore, and (inevitably) among his test tubes and flasks; but Jimmy himself rapidly becomes so thoroughly exasperating, it gets harder and harder to take an interest.

There is typical Warners cynicism in the step-wise destruction of Jimmy, who is – to put it mildly – not exactly the sharpest knife in the drawer. It takes him forever to grasp what Dutch Barnes is really asking of him, and his token protest is soon drowned by Dutch’s fast-talking and his promises of easy money. Struggling to hold his business in the face of a threat from a large chain, and unable to afford to marry Norma, Jimmy is soon swayed—making all the obvious excuses to himself: that he only makes the products, it’s not his business what Dutch does with them; that no-one is really getting hurt; that Norma deserves the best he can give her.

These arguments work so long as Dutch is only demanding harmless items like toothpaste and cold cream and perfume; but when he gets it into his head to counterfeit the country’s best, and best-selling, antiseptic, Jimmy baulks—explaining that the success of ‘Odite’ is due to a proprietary ingredient which he cannot reproduce. That’s okay as far as Dutch is concerned: “We’ll make the first antiseptic without any antiseptic.”

(A moment which prompts me to ask yet again: WHERE is Joseph Lister’s biopic??)

It takes the stick-and-carrot of threats and payment to make Jimmy give in on this one, but give in he does – marrying Norma on the proceeds of his “bonus” – so it is hardly surprising that Dutch feels confident in moving on to another, still more contentious product: counterfeit digitalis…

When Jimmy’s production-line expands to include Odite, the plot of The Big Shakedown opens up likewise. The company that makes the antiseptic and the creator of the product, Mr Sheffner (Henry O’Neill), decide to take legal action again Dutch’s own company when they gain a valuable witness in the form of Dutch’s discarded moll, Lil Duran (Glenda Farrell). Realising who must be talking, Dutch decides – literally – to kill two birds with one stone, eliminating Lil while making Jimmy an unknowing accessory to murder. The loss of their key witness causes the lawsuit fall apart, forcing Odite into bankruptcy and destroying Mr Sheffner’s life’s work. Meanwhile, Norma develops complications in her pregnancy—including a heart-condition that may require treatment with digitalis…

The Big Shakedown is a strange film. Its subject matter is serious enough, but there is often a facetious note about the proceedings that feels out of place.This is particularly so in the scenes featuring the “marketing” of first product in the new venture, wherein meek little druggists are cowed into buying cases more toothpaste than they could possibly sell, and Dutch’s goons, pressed into declaring whether they can tell the difference between the real Polydent and Jimmy’s counterfeit, protest having to clean their teeth at all.

Meanwhile, Jimmy is such an idiot that it is impossible to feel any sympathy for him, and we are left to wonder what on earth Norma sees in him—not least because she’s played by a young Bette Davis.

This was in fact one of the thankless B-films that Warners continued to force upon Davis even after her Academy Award nomination for Of Human Bondage, and was a factor in her decision to run away to England in a desperate attempt to break her contract. She’s wasted here as Norma, though her performance is unsurprisingly one of the better things about the film. That said, she does her best work opposite everyone but Charles Farrell, which suggests that she too found the central relationship unconvincing. In fact, the suggestion that Norma would or could just forgive and forget, after all the misery and loss Jimmy’s actions cause her, is rather insulting; while Jimmy’s end-of-film exoneration is not merely insulting, but absurd. We appreciate that this is just a B-film and they need to wrap things up; but still…

By the skin of its teeth, The Big Shakedown was a pre-Code picture; and to this we may attribute not only Jimmy’s final free pass, but the fact that another character gets away with murder. Conversely, we note that even in these relatively free times, a woman (even a married woman) was not allowed to look pregnant: Norma’s flat abdomen, as she lies in her hospital bed “in labour”, is another moment of absurdity.

A possible point of contention here is the running gag provided by Sidney Miller as a Jewish kid from the neighbourhood, which has a distinct whiff about it. However, it’s obvious nothing unkind was really intended, so YMMV.

And while the pickings overall are slim, thankfully The Big Shakedown does offer some wry and even daring touches in its marginalia, and it is here that it is at its most entertaining: Dutch’s pained realisation that the days of beer and roses are over; his goon, Lefty (Allen Jenkins), misunderstanding the plan to move into “the drug racket” and likewise, later on, “toilet water”; Lil’s slang-riddled testimony to the District Attorney, and his secretary’s bewildered reaction as she tries to take the deposition; and best of all, the moment when a middle-aged male customer enters the drugstore to purchase a certain item…but changes his mind about asking for it when he finds a woman behind the counter…

Footnote:  There’s no advertising art associated with The Big Shakedown showing Jimmy doing SCIENCE!!, so I’ve had to append a screenshot. Likewise, the only lobby card with Bette has her looking exactly as miserable as she no doubt was making this, so – following the same logic I used with respect to College Coach – I’ve gone instead with one showing Jimmy getting the snot beaten out of him. 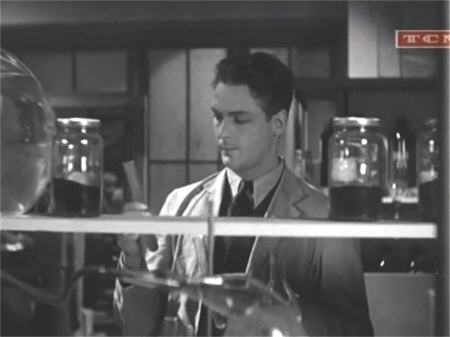